Deprecated function: The each() function is deprecated. This message will be suppressed on further calls in _menu_load_objects() (line 579 of /home/customer/www/wanglembak.com/public_html/includes/menu.inc).

In Lembak culture, and many Indonesian cultures, for that matter, it is common to get married and then begin having children right away. In fact, it is extremely uncommon to wait. Often couples will have a couple children and then use birth control. (The Indonesian government even did a large campaign a while ago called, "Two's enough." with pictures of happy families with two children, where they offered free or very inexpensive birth control to women after they have had two children. This was not required, but encouraged families from having the normal 7-10 children to only two or three).

There are many beliefs and traditions surrounding pregnancy and birth. If a woman has a hard time getting pregnant, there are many traditional concoctions that the couple can try, such as raw egg mixed with turmeric. They also believe holding someone else's baby can bring good luck with child bearing.

Once pregnant, sometimes women will touch others (specifically someone with whiter skin or a more pronounced nose) in hopes that their baby may aquire some of these characteristics. It is also said that eating greens will help the baby grow hair. Other foods may make the baby's complexion more beautiful.

On the other hand there are also many taboos during pregnancy.  The idea of the "evil eye" is prevelant amongst the Lembak, stating that if the mother looks at another with jealousy, it is quite possible the baby may end up with an unwanted trait. In addition, a woman is encouraged not to scratch her belly for fear it may harm or leave marks on the child.  She is encouraged not to drink coconut, pineapple, durian, ice, or soda for fear of miscarriage. Pregnant women may avoid doorways while their husbands avoid fishing or killing animals in order to avoid a difficult labor or misfortune. Pregnant women also avoid going out during the last mosque call of the day for fear of evil spirits taking their babies.

Many Lembak people believe that around the same time the baby begins to kick in the womb  is also when he receives his soul. Some also believe that the baby makes an agreement with God while in the womb where they decide what works he will do during his life on earth.

Often once a woman has reached her seventh month of pregnancy, the family will throw a prayer/ thanksgiving feast thanking God for the baby. They believe if a child has made it to this point, the baby is much more likely to make it full-term. This is especially true if there has been a miscarriage in the past.  During this time they often sacrifice an animal on the baby's behalf in accordance with their religious custom. (check this)

As the time draws closer for delivery a woman begins preparations. One such local tradition is a literal "baby shower," where a woman will bathe with citrus water. This is done in the very early morning of the first three days of her 7th, 8th, and 9th month of pregnancy. The oranges are prayed over and prepared by a local shaman and then given to the woman. She then presses the juice from these oranges (around 25 or so) into her bath water before showering in the morning. In addition, they shaman may give her a pin to wear, usually hidden and pinned beneath her clothes. Both of these traditions are done in order to guard the baby in the womb against evil spirits. 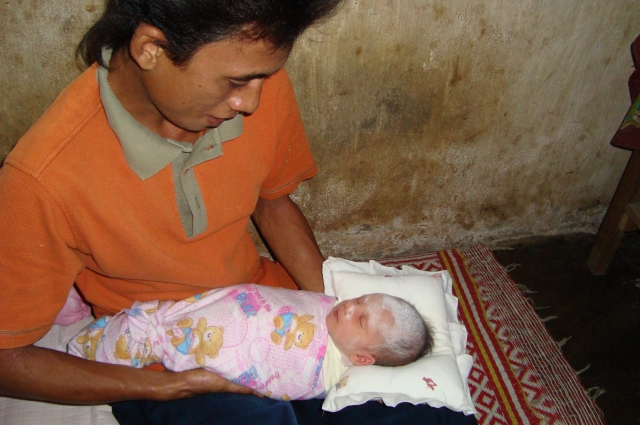