Some cultures have baby showers, others have dedications, while others have what is known as an Aqiqah. An aqiqah is a way of celebrating the birth of a newborn child. In essence it’s a welcoming celebration for all the community to share in.According to the Hidaya Foundation, “an aqiqah, in Islamic terminology, is defined as ‘sacrifice of an animal on the occasion of a child's birth.’”1 This celebration is not a requirement of Islam, but is highly recommended if the family can afford it.  It is a way of recognizing that a child is a gift from above. “Aq” in Arabic means “to cut.” Usually there are two main types of cutting going on at such a ceremony: the sacrifice an animal and the baby’s first haircut.2According to the hadith, a family is to slaughter two goats for a boy or one for a girl. One third of the meat may be given away to the poor while the rest is used for a community celebration.  It is encouraged to have this ceremony seven days after the birth of the baby, but can be performed later if necessary.1  The Lembak really value community, so an aqiqah is a great way to welcome a new baby into that community.  There are many ways to perform an aqiqah, but what follows is an example of one such event amongst the Lembak Delapan.Early in the morning, the drummers start to play. Music can be heard throughout the neighborhood, summoning those around that the ceremony is about to begin. A speaker gets up, usually a family member, and welcomes everyone to the event.  The stage is set: There are men dressed in nice batik shirts, sarong fabric wrapped around their waists, and black formal hats on their heads. They are sitting with large drums called “rabana.” They begin to play another set while platters of food are brought out to the elders, who sit on mats nearby. Food plates are placed in between them, along with hand-washing water, and empty plates for their own food. This area is known as “endengan.” It is where special men of the community sit and eat first (rather than joining the buffet later).  Meanwhile, guests arrive and take a seat in the crowd. As the music is playing, the parents, adorned in traditional attire, come out of the house carrying their little one. They are followed by three platters: one with a leaf and ashes, another with a decorated coconut, and the third with yellow rice.They begin moving through the drum group. The parents stop in front of each drummer.  The drummer then takes the leaf (sadingin) and places it on the baby’s head, to “cool off the baby”. He then places his hands on the baby’s head, often speaking a word of blessing.  From there, the parents, baby, and platters continue to move through the drum group. Once they have finished, they move on to the group of elders (the endengan). The father cuts the baby’s hair first, followed by the imam (religious leader). Each snippet of hair goes into the coconut. Again, each takes the leaf, blesses the baby, snips a piece of hair, and places it in the coconut. Sometimes, but not always, the hair is weighed. Equal to its weight in silver or gold is then distributed to the poor.3 Next they go back in the house where the baby is swung. There is a special swing, where the baby must be swung seven times. The babe can only be swung by women with a certain status- those who have never had a miscarriage, been widowed, divorced, or have any deformations, thus ensuring good fortune upon the baby.Later a group of women begin playing small drums and tambourines while singing a cheerful song inside the house.  The family, along with the baby, and the platters walk in a circle seven times around a lit candle. They then sit on the floor and family members come one by one to cut the baby’s hair. Again, they place the hair inside the coconut. The father was the first to cut the baby’s hair, and now the mother is the last. All the while the community is celebrating, enjoying a buffet of food, and offering congratulations and gifts to the family. 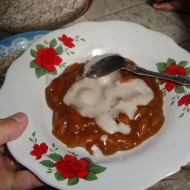 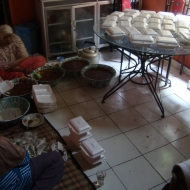 Caption for rice porridge: Days of preparation have gone into preparing food for the event. Women have been cooking for days together and men have been preparing the stage and slaughtering the goat. In honor of the aqiqah, special porridge is prepared to be distributed to all.  If the baby is a girl, sweet porridge is made: a boiled mixture of rice flour, palm sugar, and coconut milk. If the baby is a boy, the porridge is salty to taste, with chicken broth and fried onions. The porridge is then boxed up and given out to hundreds of people. 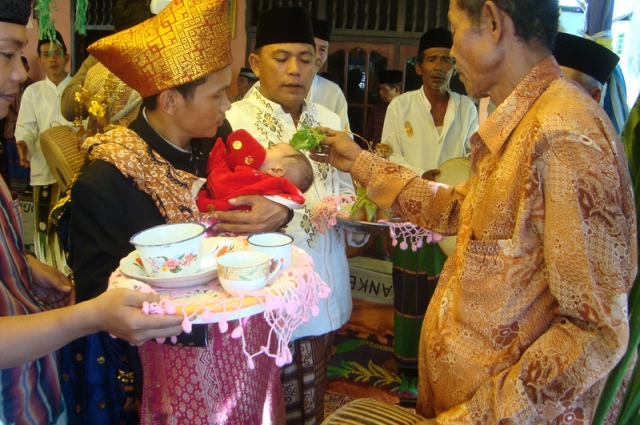