Brickmaking is a common profession for the Lembak people. Although there are other tribes and people groups who make bricks, if you see a brickmaking factory (called a bedeng) you can bet that Lembak people are nearby. The process of making bricks requires certain materials (like good clay) and a certain knowledge of how to form, stack and bake the bricks. This knowledge is passed on from one generation to the next, usually from father to son, son to grandson, etc. Women help out in the process, but most of the work is done by men and their sons.

The process of making bricks is as follows. A good site for the factory is chosen. Usually this is on top of or next to a large area of good clay. The clay is orange in color. The clay is dug up in batches, mixed with water, and then stepped on to make sure it is the right consistency. Once the clay is moist enough it can be used to make bricks. A mound of clay is thrown on top of a wooden frame to form the shape of the brick. Sand is sprinkled over the top to prevent the clay from sticking to other surfaces. It is then removed from the frame using a wire cutter called a pengikis. The formed bricks are stacked on top of little wooden platforms and stacked on top of each other. 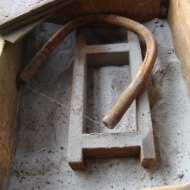 After several bricks have been formed they are carried over to the drying area. The bricks are layed out in long rows and stacked top of each other to dry. It takes approximately two weeks for the bricks to become hard enough to bake. A total of 500-600 bricks can be formed, cut and stacked in a single day! 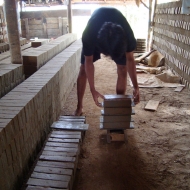 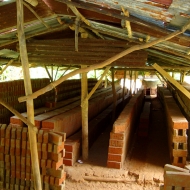 After a sufficient number of bricks are dry it is time to bake them in the oven. The oven is a large pit that is created by, you guessed it, other bricks. Two holes are open on one side of the oven to allow wood to enter. The bricks are stacked in an interlacing pattern and a chimney is created at the top. This allows the heat to be exposed to all the bricks yet allowing the smoke to escape. Bricks that are closest to the logs and fire turn black and are discarded, but all the rest are made strong by the heat. Logs are fed into the open holes of the furface throughout the day to keep the heat up. It takes about three days for the bricks to bake. Then they are allowed to cool for two days.

Finished bricks are sold for approximately 400 rupiah a piece (about 4 cents). This might not seem like much but usually bricks are sold by the truckload and not individually. The bricks are sold directly to construction workers. They get approximately 800,000 rupiah per truck ($80), or a salary of 4,000,000 rupiah a month ($400). This is split between the people involved in process. Workers can set up a factory and dig clay from a single location for about two years before it is exhausted and a new site has to be found. 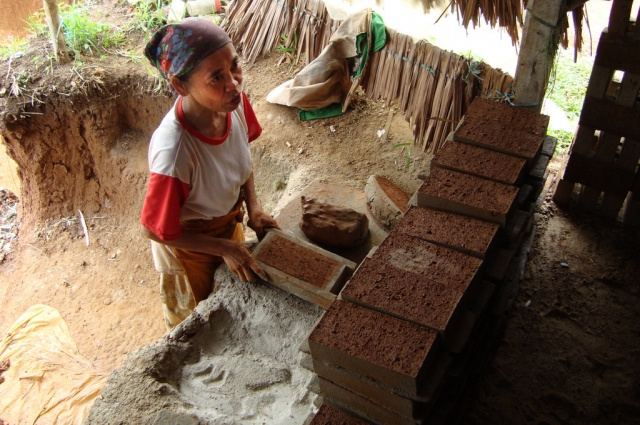